New York Times recently had an article by Ivan Penn titled “More power lines, or rooftop solar panels?” which poses an important question: Should we rely on large-scale power grid to deliver clean energy, or bet our future on distributed energy resources (DER) such as rooftop solar panels?

First of all, let me say Penn’s article is extremely insightful in that it uncovers the messy side of policy making and execution: various interest groups, split views within the government, and the intricate nature of local politics.

But in the end, the article concludes, “In all probability, there will be a mix of solutions that includes more transmission lines and rooftop solar panels. What combination emerges will depend on deals made in Congress but also skirmishes playing out across the country.“

I largely agree with the conclusion that there will be a combination of large power grids and mini-grids. But I would also add that it also depends on local risk factors.

As an ongoing research project, my colleague Richard Stuebi and I are looking at how to provide electricity access to the vastly under-developed Africa continent. We have since introduced our initial results, which can be summarized with the following risk-embedded system dynamics framework:

The idea is straightforward. But there are large uncertainties and risks surrounding large-scale grids, whether they are environmental, social, or regulatory, then the choices tilt towards distributed energy resources such as rooftop solar. But in a stable and risk-free region, large-scale power grids are warranted.

As an application, look at what the above-mentioned article said about California. Because of the disruptions caused by wildfires (which in turn partly caused by the grid operator PG&E itself), more and more consumers are turning to their own home solar systems.

But let me end with one thought. The connected grid still has value (provided that it makes sense to be there in the first place). This is because it can balance over-supply and shortages for everyone connected on the grid. Just look at what happened to Texas. It had a deep freeze that shut down many power generators. But because its grid is not connected to the larger out-of-state grid, it ran out of options.

In the end, perhaps a connected DER network may be the best option for a lot of people here in the US. In other words, many people can rely on large grid during normal times, but if any disruption happens you can resort to your local battery and rooftop solar.

Wow What a Great Data Site 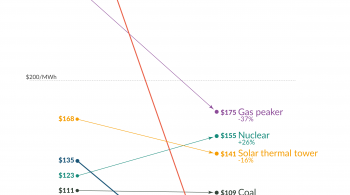 Wow What a Great Data Site