One of the most important questions to ask in transitioning to renewable modes of transport is simply: How much less CO2 are we going to emit by switching to renewables?

The other important question is: How much does it cost?

I have been researching on that question quite a bit. And I found quite a few good studies. But this one particular article was so well written that I am excited to share it.

It was a study done in Canada by three researchers (Lajevardi, Axsen and Crawford) in University of Victoria and Simon Fraser, titled “Comparing alternative heavy-duty drivetrains based on GHG emissions, ownership and abatement costs: Simulations of freight routes in British Columbia“. It was published in Transportation Research Part D in 2019.

The first two sentences of the abstract made it clear what this study is about:

They then thoroughly surveyed the literature, and summarized the main findings of the most relevant papers in a tabular form. Beautiful.

To make the article accessible to a wide range of audience, they include a graph explaining how each type of drivetrain technology work, as follows:

The most beautiful part is how they summarized their results. Instead of presenting several long tables with numbers, here are what they did:

That was just beautiful! Also notice how they clearly explained the graph in the legend.

The graph effortless showed the difference of each drivetrain technology in terms of CO2 emissions. What I learned from the graph is that fuel cell technology is very clean, almost as good as battery electric technology. Diesel is the worst, and natural gas is somewhere in the middle. What is remarkable is that there is a 100X difference between the best and the worst!

But when we look at the cost side, it is a different picture:

Cost-wise, diesel is the cheapest while fuel cell is the most costly. But battery electric is showing a lot of promise, as the difference between its cost and diesel is relatively close (less than 3x). Even fuel cell technology is less than 3X compared to diesel.

This is the best written research I have seen in a while, both in terms of content and delivery. The authors deserve big kudos.

emission GHG transport
« Previous Post The One and Only Michael Dell Next Post » EV is not just about making cars. It is about the Supply Chain.

ICCT’s Report on the Lifecycle Comparisons of GHG Emissions of Gas Cars vs. EV is Filling a Void 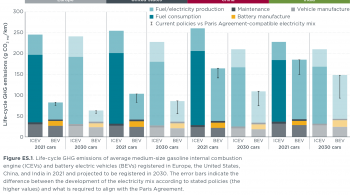 ICCT’s Report on the Lifecycle Comparisons of GHG Emissions of Gas Cars vs. EV is Filling a Void